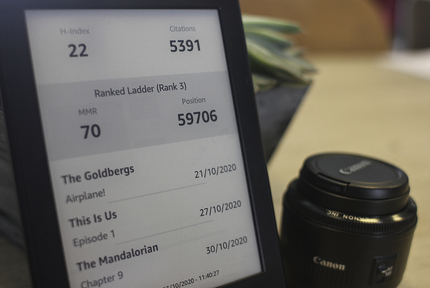 In the last post a Kindle Paperwhite 3 was jailbroken, Python 3.8 installed and all boilerplate code was added to have a way to start our script and launch it from KUAL. Now we can actually dive into the actual Python code that will turn the device in a proper DashBoard. To do this we’ll create a miniature ETL pipeline (Extract - Transform - Load), that will fetch data from relevant websites (the extract part), combine it into a dictionary (the transform) and put all parts in an SVG image (the load). The latter can then be converted into a PNG which we can show on the screen.

As always, all code for this project can be found on GitHub.

I have plenty of devices telling me the weather forecast, so I didn’t want to do yet another weather dashboard. Matter of fact, a lot of the code here is based on a KUAL Extension that does exactly that. Check it out here if you are looking to do a weather dashboard. I’ll pick something more specific for me, but it should be relatively easy to adapt the code to other websites and API’s to make a dashboard tailored to your own interests.

After some thinking I decided to pull data from three websites; Google Scholar to grab the number of citations my publications have received as well as my H-index, my current Gwent rank and score (a competitive online card-game) and from TVMaze air dates of upcoming episode for series I like. To avoid making the installation of this extension overly complicated, no additional packages will be used, so only the standard library will be used. Unfortunately, this means getting websites with urllib and regular expressions rather than requests and BeautifulSoup. Though, moving some complexity from the installation (jailbreaking a Kindle to get this to run is hard enough already) to the code is an acceptable trade-off.

All functions to grab and parse data from websites is contained in extract.py, my Google Scholar page is the easiest to parse so let’s start there.

As far as getting and parsing an html page goes, this couldn’t be more straightforward. We use urllib to get the html data and with a single regular expression can get all fields in the table with the citation statistics. This should give us six hits on each page and by using the zip and dict function it is possible to quickly merge those hits with the correct names for the fields.

One odd thing is that the ssl_context needs to be created and added to the request. While the code works fine on my computer without, it gives an error on the Kindle without this bit included.

Getting the Gwent Profile Data

While a few simple lines sufficed for Google Scholar, getting the data from my Gwent profile contains a lot more ugly code. Here the lack of a proper package to parse HTML, like BeautifulSoup, is really tangible. However, while not the prettiest code, it get’s the job done. It is just a matter of finding the spot in the HTML code where the piece of information is located and writing up a regular expression to parse it out.

Note that re.findall returns a list of all hits, which should contain one element here. Though rather than extracting that hit with its index, the join function is used. Due to this little trick, if the Gwent website is updated and the regular expression won’t match the code won’t yield errors, it will just have an empty strings as values. If the values no longer appear on the dashboard it is time to revise the code, but the other items will still work as planned.

TVMaze has an API that returns JSON objects, so that is easy to convert to a dict and doesn’t need messing around with regular expressions to parse out parts of HTML. However, here there is an extra complexity that data for each show (which will be passed to the function as a list of IDs) has to be fetched first. If that contains a link to the upcoming episode we need to get that endpoint additionally to find the name of the episode and the airdate.

Caching and Catching Errors with a Decorator

Most sites don’t provide new data every hour, so there is no need to fetch the data that often. We can simply store the results and the next time we refresh check the time since the last modification. If that is recent enough we load the data and provide that. If the file is older than the chach time, we fetch new data from the internet.

As the data comes from the internet a few things can go wrong, the Kindle’s Wifi might not come up fast enough, or the internet might be down, or one of the websites times out … and these errors aren’t caught yet. I also don’t want the dashboard to display empty information for an hour or more because one website was temporarily unreachable. Here we can also leverage the cache, if we fail to get up to fetch data from the internet, we load the cache regardless of the age and show that. It is better to show (slightly) out of date information than no information at all.

The decorator shown below elegantly combines both of these, note there is some boiler plate code for checking the last modification to a file. This part of the code is included in ./dashboard/bin/cache.py

To get this running we’ll need to decorate the extract functions like shown below. The decorator takes one argument, the filename to write to (potentially this could be done automatically based on the decorated function’s name).

Time to Transform and Load

So now we have to finish run.py which will be called by the shell script every hour, run the extract functions, combine the output and visualize it. An easy way to create a dashboard is using an SVG file that looks exactly the way you like, but with a token in spots where you want the dynamic text and values to appear. I’ve used this trick before and this is also what was used in the weather dashboard I’ve been using as a reference for this project. This is very easy code-wise, just see the updated run.py below. All extracted data is combined in a dict, ./svg/template.svg is loaded as a text file and all the tokens are replaced by the values to display. Finally, the output is written to disk. There is one line of code that will check if the operating system is windows and adjust the path accordingly. This is useful for debugging as I can execute the code on my main machine without issues.

Now run.py will create a new SVG file each time it is called. However we need to revise start.sh to convert this SVG into a PNG image and show that image on the screen. The Weather Dashboard uses a combination of rsvg-convert and pngcruch to create a png file compatible with the Kindle’s own eips command to put it on the screen. Here, the SVG is still converted using the same tool, but fbink is used, which can put any png image on the screen correctly, without the need for an additional conversion using pngcruch. Furthermore, the temporary files will be cleaned up in this script.

One big issue is that the Kindle mounts most partitions with the noexec flag, meaning you can’t execute code and scripts from there. For scripts that isn’t much of an issue as you can overcome this by starting them through the interpreter; /bin/sh <scriptname> and python3 <scriptname> can be used for shell and python scripts respectively. To run rsvg-convert there is a bigger issue as this is a binary file. The workaround here is to copy the executable code and libraries to a share where code can be executed, here /var/tmp is used, add the path to the libraries to the environmental variable LD_LIBRARY_PATH and run the program from there.

To avoid flooding KUAL’s log over time (especially fbink is very verbose) all output from the tools is caught and piped to /dev/null (essentially the command line’s garbage bin) by appending > /dev/null 2>&1 to the command.

Normally, after 10 minutes of inactivity, a Kindle goes into deep sleep, without the wakeup timer enabled. This needs to be disabled, otherwise each time the Dashboard wakes up for ~45 seconds to refresh its data, the clock is ticking … and once 10 minutes have passed in total the Kindle goes into deep sleep permanently until the power button is pressed. The dashboard will stop refreshing once this happens. To disable the Kindle’s deep sleep you can type ~ds in the search bar and hit enter. 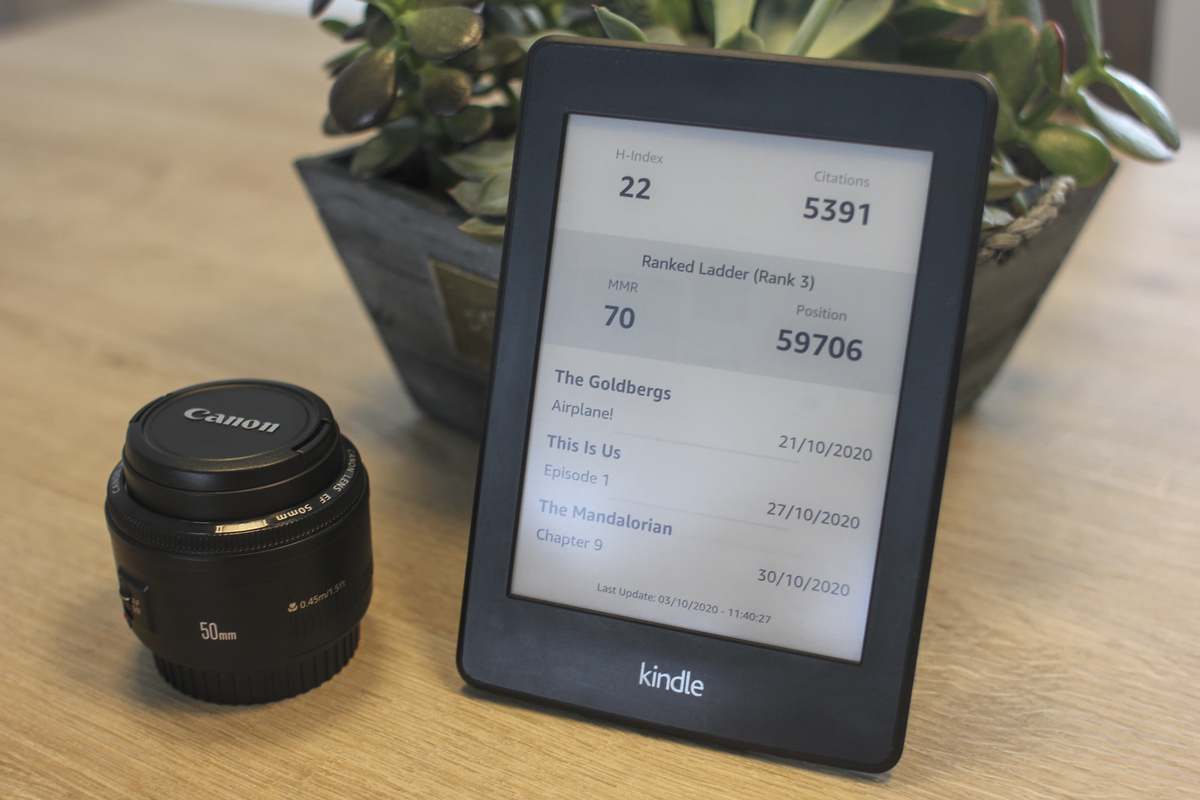 While I initially thought getting something to run on a Kindle would be the hard part, it turns out I was wrong… Making sure a script runs perpetually was harder. With issues popping up only after some time, it becomes very time consuming to pick up and fix errors. It took me quite some time to figure out that the Kindle was still going into deep sleep on its own, realize a forgotten print statement caused a strange error in combination with a long running script and KUAL, … Not being able to execute code directly from the extension folder also was unexpected and took a fair bit of hacking to figure out what was going on, and where I would be able to run the program from.

However, despite all that, the Kindle is now turned into a dashboard for my desk! Saving the device from being thrown away, mission accomplished ! Only thing to do is 3D print a nice stand for it.