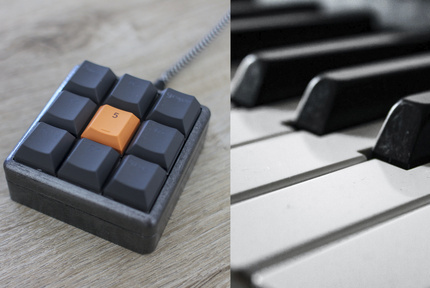 With a MIDI library available for the Raspberry Pi Pico making a little MIDI “piano” is relatively easy. The MacroPad which I build last month is the perfect little device to play around with this. If you are interested in how to connect buttons and LEDs to a Pi Pico, check out that post here! 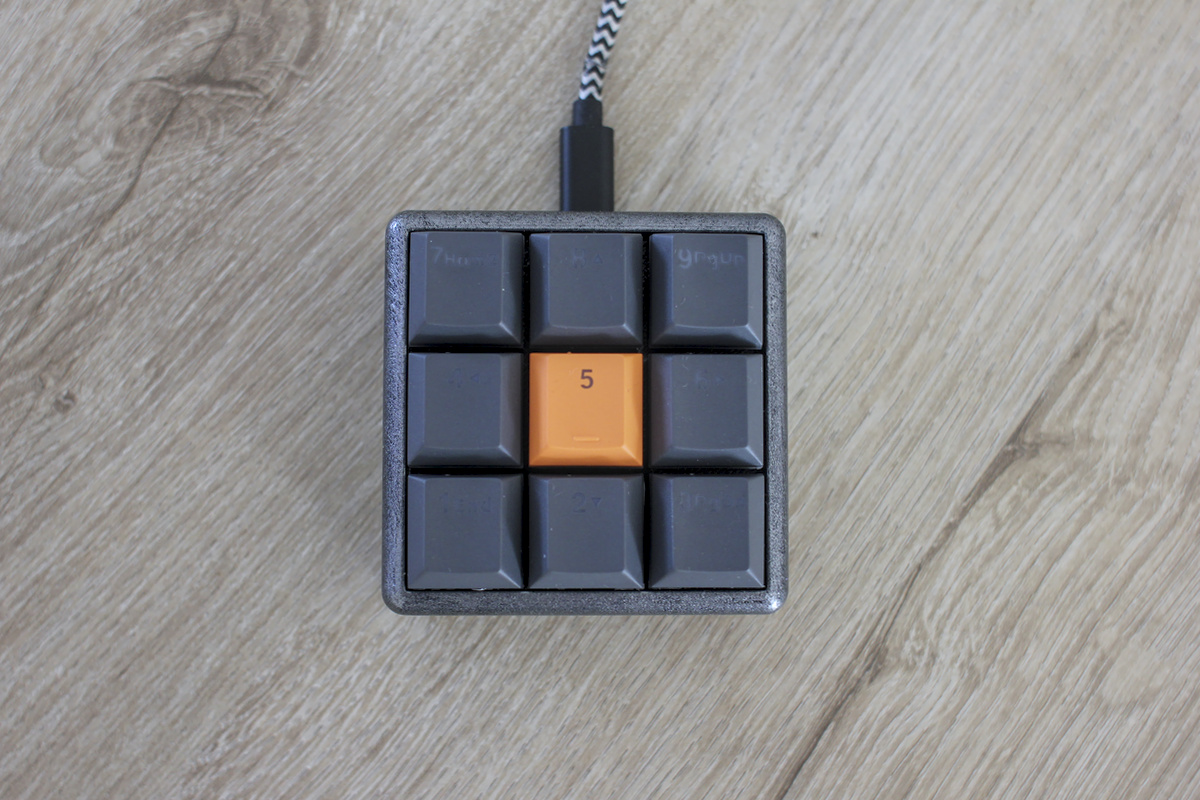 A MIDI controller behaves different from a USB keyboard; once a key is pressed it generates a MIDI signal that can be picked up by a compatible instrument or software to produce a sound. The signal contains the note that needs to be played, but can also contain the velocity (how fast/hard a key is pressed). Furthermore, it is possible to send signals to bend notes, set the volume of an instrument, … Keys also don’t repeat after being pressed longer. So there are a number of thing to change in the code.

If you want to follow along exactly, first you’ll have to build my MacroPad, though pretty much any Raspberry Pi Pico with a few buttons attached will do. Just make sure to update the code below so that the pins correspond with your hardware.

The Raspberry Pi Pico will need to run CircuitPython for this to work, my MacroPad already had this but if you start from scratch you’ll have to flash the correct firmware to the Pico. Next, connect the Pico to a computer, it will show up as a USB drive. Get the AdaFruit MIDI library, and copy the folder adafruit_midi (from the repo) to the lib folder on the Pico (create the latter if necessary).

You will also need to install a tool that turns the signals from a MIDI device into music. For Windows there is a free tool Piano 10 which is fine to start with. Look for it in the Microsoft store.

Finally, create a file code.py in the root of the Pico drive and add the code below. Restart the Pico, and done ! You now have a functional MIDI device. Though, let’s go over the code, so you can change the parts to match your project in case you aren’t using an exact replica of my MacroPad.

Turning the Pico in a MIDI device

The full code is shown here, and we’ll go over it step by step below.

After loading all libraries a midi object is created with adafruit_midi.MIDI, this one liner will also turn the Pico into a USB MIDI instrument. Now we can send MIDI signals using midi.send().

Next there are arrays defining which GPIO pins are connected to LEDs and buttons. This is how I wired up my device, unless you are building an exact replica you’ll have to change this to match your circuit. There also is a list of notes that will be played if a button is pressed. These need to be te same length, and the elements correspond. For instance the LED connected to pin GP18, should be the one below the button connected to pin GP13 and when pressing that button it will play notes “C3” and “C2”. Here an array is used for each button so multiple notes can be triggered simultaneously, in this case playing a note, and the same note an octave higher. Similarly, you could also play an entire chord at the time.

After defining these, there is a bit of boilerplate code to initiate the LEDs and buttons. This is identical to the code in the MacroPad.

For a MIDI device keystrokes need to be handled differently than for a computer keyboard. If you hit a key on a piano and hold it, it will not start repeating after a brief moment like hitting a letter key on your computers keyboard. So key presses are handled by keeping track of their state in two lists. As soon as a button is pressed, the corresponding position in pressed_keys will be set to True, once it is released it will be set to false. The list triggered_keys is used to store for which keys a signal already has been sent.

The main loop will listen to key presses and handle them, note that the way the LEDs are handled is identical to the previous post, so this will not be discussed here again (that part has been removed in the block below for readability). The first thing that is done is loop over all buttons and check if they are pressed, if they are we set pressed_keys to True. Next, we loop over pressed_keys and triggered_keys and check for keys which are pressed down and have not triggered a MIDI signal. If that is the case, the Note On signal is send and triggered_keys set to True. The line midi.send([NoteOn(a, 60) for a in note_mapping[ix]]) will send the event for all notes linked with that button. The velocity, the number 60, here is constant as there is no way to check how hard/fast a button was pressed.

Keys which are no longer pressed down and which are still in a triggered state require a Note Off signal to be emitted, this is done similarly to setting a Note On with midi.send([NoteOff(a, 0) for a in note_mapping[ix]]). Here triggered_keys is set to False for the released button.

As there is no need to do anything when pressed_keys and triggered_keys are in the same state we wait for a brief moment with time.sleep(0.01) before the loop repeats the entire block.

If everything is properly working, the Pi Pico should now show up as a MIDI device in software that can work with MIDI controller. In Piano10 click the MIDI button and select the Pico as the input device as shown below. Once you start pressing keys, Piano10 will highlight the notes played on the on-screen keyboard and play the sound. 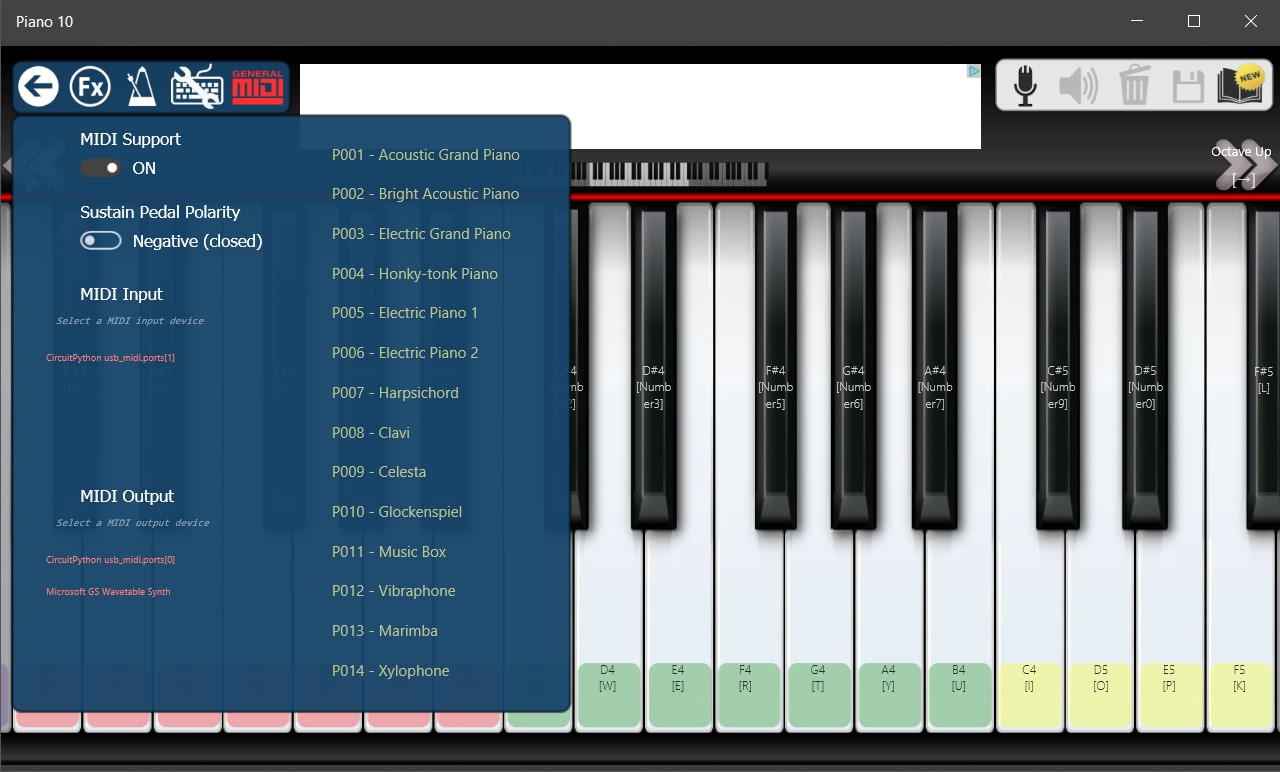 Songs you can play with nine keys

As the buttons can be reprogrammed, you can essentially play songs with up to nine notes. With a simple diatonic one octave scale there are plenty of nursery rhymes you can play. “Frère Jacques”, “Twinkle Twinkle Little Star”, “Row Row Row Your Boat”, “Oh Susanna”, “Oh, When The Saints”, …

If you do reprogram some buttons you could play “Happy Birthday”, “7 Nation Army” (The White Stripes), and probably many, many more.

You could also map each button to “strum” a full guitar chord which would let you play a few sing-alongs. However, without strumming patterns it might sound a bit flat and uninteresting.

Having a very “clicky” keypad as a MIDI controller isn’t the best, you probably want something with quieter buttons. Though as a proof-of-concept how to set up Raspberry Pi Pico as a MIDI controller it is a great demo! While you’ll probably outgrow the nine buttons of this keyboard if you are serious about creating music, it is a fun way to get into creating/working with MIDI devices and maybe learning how to play a few nursery rhymes along the way.

**Update: ** If you liked this post, have a look at a more recent version of the code here. This improves handling chords and includes two modifier buttons to expand the number of notes that can be played substantially.